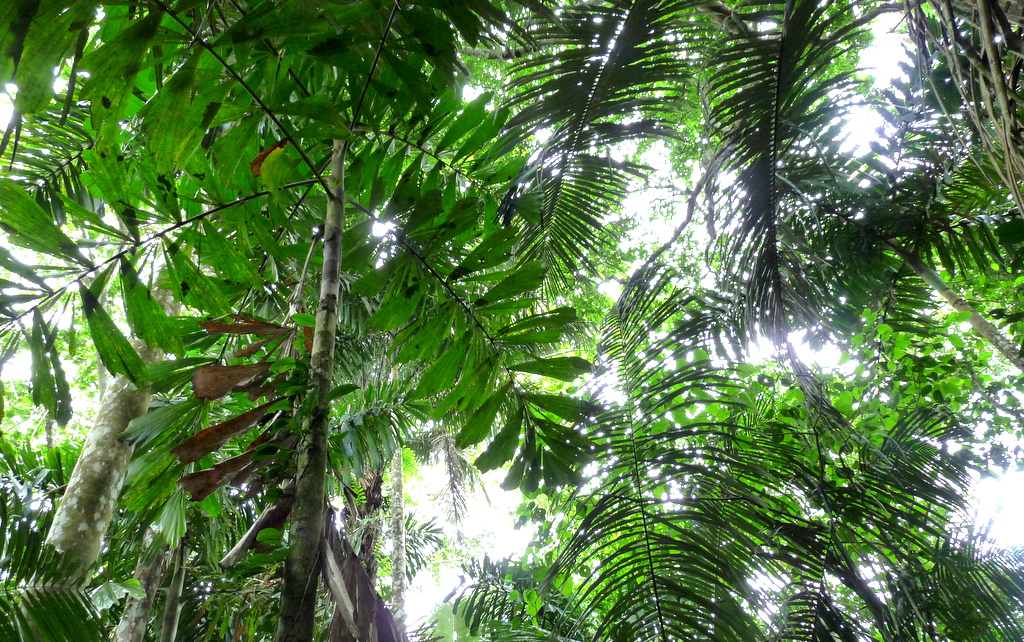 You know you’re having a true jungle moment when a monkey sits on your head.

Maria the spider monkey (names have been changed to protect the innocent) loves to steal visitors’ plastic water bottles. She lives on Monkey Island, a sanctuary in the Madre de Dios river in the Peruvian Amazon jungle. She is an inquisitive and agile monkey.

Our group was gathered around a feeding platform as Maria eyed us all curiously and our guide talked about rescuing Amazonian primates from the pet trade. I was leaning casually near the small plank scattered with food bits while Maria played with a plastic bottle, when unexpectedly she scampered across the plank and decided that my head would make a good perch. In a flash my vision was blocked by black fur, and a long, very strong tail wrapped snugly around my neck – so snugly, in fact, that I had to wedge a finger between her tail and my skin to be able to breathe. I could hear cameras going off all around me.

Well, like I always say, you haven’t lived until you’ve had a monkey’s butt on the top of your head. After a few minutes on my head, Maria decided she needed a different viewpoint and climbed onto someone else’s hair.

A once-in-a-lifetime experience. And in a few decades, a never-in-anyone’s lifetime experience. Our rain forests are being deforested at such an alarming rate and so many species are dying out completely that nations around the world have declared an international Climate Emergency.

Coming in for a landing into Puerto Maldonado in the Peruvian Amazon, it wasn’t hard to spot the scars of clear-cutting.

It’s making the news in a big way now. You may have been seeing some of the headlines, such as Nature crisis: Humans ‘threaten 1m species with extinction’.

According to Rainforest Rescue, we are, on average, losing an appalling 150 species each and every day! If you were to think of that in terms of ‘man’s best friend’, dogs, that would be roughly the equivalent of every single dog on the planet being wiped out in three days.

When I was a child, I mourned the loss of famously extinct species like the Passenger Pigeon and the Dodo bird, which I would never see because of the stupidity of earlier humans who didn’t understand the impact of what they were doing. You’d think that, as we evolve as a society, we’d have learned something.

Every species on this planet is critical to the ecosystem that it lives in as well as our global ecosystem. The disappearance of these thousands of species will have an impact that continues well into the future.

Animal species also help keep our plants alive by pollination, dropping fruit pits to germinate in new areas, and transporting seeds in their fur. Without this continuous regenerative cycle, we are doomed.

Rain forests are majestic and magical places. Ancient remedies climb over each other in the undergrowth, bananas and mangoes grow wild, tree trunks transmit sound so far that local people use them as geolocators. To walk through the forest is to immerse yourself in the lungs of our planet as they breathe and pulse around you. I’ll let some of my photos speak for themselves. 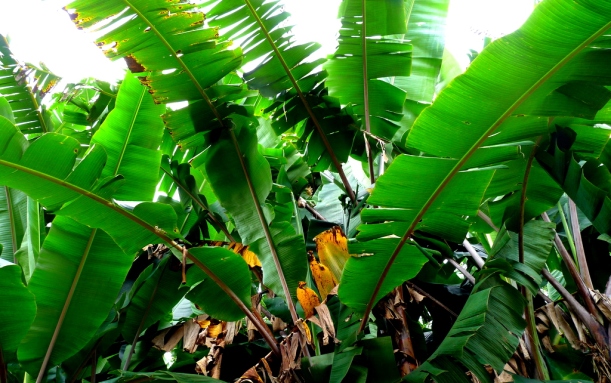 Rain forests are in severe danger, as are all of their inhabitants, from millions of plants, animals and insects to the many tribes who’ve called the forests home for centuries. We have no right to take that gift of life away from them.

You can help. You can visit these incredible treasures to understand what they mean to the world ecosystem, and to all your children who’ll have to cope with the wreck we are making of this planet, and you can sign petitions to pressure governments to stop mining interests and rapacious developers. 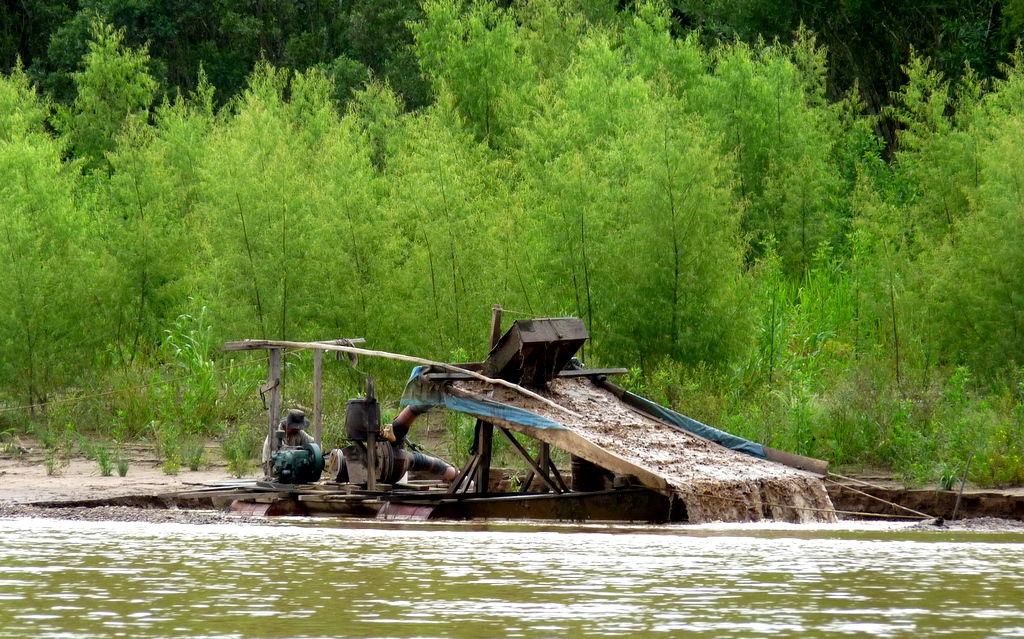 Petitions work. One such petition needs 200,000 signatures quickly: “UNESCO World Heritage: tell the palm oil barons to back off!” All it takes is a few moments of your time to make a difference. The, maybe one day in the future, your children will be able to find their own wild and incorrigible Maria monkey to have a close encounter with.

Wet jungles are fascinating places, and possibly none more so than the Amazon rainforest. Nothing about it was what we expected. Tropical rainforests are layer upon layer of life scrambling to exist. You can’t really get a feel for one until you walk through it.

If you were to just look at an aerial picture, you’d see the thick canopy layer spreading its myriad of leaf shapes to get as much sun as possible, but underneath the jungle teems with some of the highest biodiversity on our planet.

The massive trees are the support structure of the jungle, but they pay the price, playing host to epiphytic plants and getting choked to death by thick strangler vines.

Their fruits are eaten by birds and monkeys of all kinds, who excrete the precious seeds to tumble down to the forest floor and germinate a new generation of trees.

In the middle the medium-growth plants all jostle for the tiny bits of sunlight that make it past the canopy. You might see wild limes and papayas, plants with long spiky leaves next to those with big glossy leaves like elephant ears.

Lichens and fungus live down near the darker and moister bottom layer of the jungle, sprouting all manner of shapes and colours. Insects climb, buzz, flit and perch wherever they can.

Dead plant life that litters the jungle floor decays to provide nutrients for the germinating fruit seeds that the monkeys and birds have dropped. The soil of a rainforest is poor in quality — it depends on everything that falls from above to feed the life it supports. Once a patch of jungle is clear-cut, it never recovers, dead for all time.

Our guide, Marco, who grew up in the very same jungle he took us through, showed us many wonders: tiny edible fruits, medicinal vines, tarantula holes in the ground, how to send a signal with the thick reverberating roots of the ‘telephone tree’…

This Tuesday, April 22 was Earth Day, a day dedicated to honouring and protecting what’s left of the precious resources on our planet. The Amazon Jungle is one of the most precious. Go and see it while you can, and do all you can to help preserve it, for every single species on our Earth, humans included, needs it to survive.

Apparently Elvis sells shoes in the Amazon, if you believe he’s still alive and kicking somewhere.

You can find just about anything in the muddy jungle frontier city of Puerto Maldonado, located at the confluence of the Tambopata and Madre de Dios rivers.

Puerto Maldonado is the gateway to many nature reserves in the Amazon jungle. Most people fly into Puerto Maldonado from Cuzco or Lima, and you can feel the steamy tropical heat as soon as you step off the plane.

The airport is a big warehouse-type building where your luggage is off-loaded through an opening in the wall. You pile onto a colourful bus hung with lots of national-team dingle-dangles from the rearview mirror for the short drive into the main part of the small city, where you can grab any last-minute supplies (rain poncho, bag of fresh brazil nuts or a sack of potatoes, anyone?) for your jungle adventure.

Finally there’s an even shorter ride down to the edge of the Madre de Dios River for your 1-2 hour excursion up the murky river waters by motorized canoe to your jungle lodge.

I love all forms of transportation! Our tour of Peru and Bolivia featured many different kinds, and this excursion was one of my favourites.

Along the river you see shore birds, people who live in the jungle going into the city or returning home by small canoe, tiny huts snugged into the thick greenery, the odd abandoned canoe (leaky, one presumes), gold miners dredging in small barges, and a wall of vegetation all around you. No monkeys swinging from the trees, or humanoid creatures lurking in the waters (for all fans of old sci-fi B movies), unfortunately, but the trip is fascinating nonetheless.

Finally you arrive at your lodge, set into the lush jungle vegetation. You get off at a tiny pier and climb up steps to a raised walkway designed to accommodate the annual flooding in the Amazon Basin. This is your introduction to your home for the next part of your jungle adventure…but more on that in another post!