What baggage do we carry around with us in our lives? Sometimes the emotional baggage, residue from episodes of anger, hurt, disappointment or betrayal, can weigh us down enormously. Forgiving someone, while sometimes a seemingly impossible task, can do us a world of good. Even if we only make it as far as letting go of the emotions, that’s a substantial step in the right direction.

When I was in my twenties, an arsonist set fire to my parents’ home. They were lucky to make it out alive. The insurance company rebuilt their house, but it couldn’t rebuild their lives.

The police never caught the perpetrator, although we had our suspicions about a miserable neighbor and some union involvement.

The ripples from that event lasted for the next decade and a half. My dad’s health went downhill, and my mom started drinking again. I cursed the arsonist for years for all the pain he/she caused to all of us.

It was only after my parents had both passed away and were free from the event’s clutches that I was able to let it go myself and move on. I haven’t forgiven the arsonist for what he/she did, but I don’t really think about it any longer, and there’s no longer bitterness associated with the memory. The Mayo Clinic website has the following thoughts on the process:

” Generally, forgiveness is a decision to let go of resentment and thoughts of revenge. The act that hurt or offended you might always remain a part of your life, but forgiveness can lessen its grip on you and help you focus on other, positive parts of your life. Forgiveness can even lead to feelings of understanding, empathy and compassion for the one who hurt you.

Forgiveness doesn’t mean that you deny the other person’s responsibility for hurting you, and it doesn’t minimize or justify the wrong. You can forgive the person without excusing the act. Forgiveness brings a kind of peace that helps you go on with life.”

So by that definition, I’ve found forgiveness.

It’s been far less easy to forgive myself for hurts I’ve caused others. There’s a subconscious sense I have, right or wrong, that I need to pay for those hurts by my continued pain at having inflicted them. 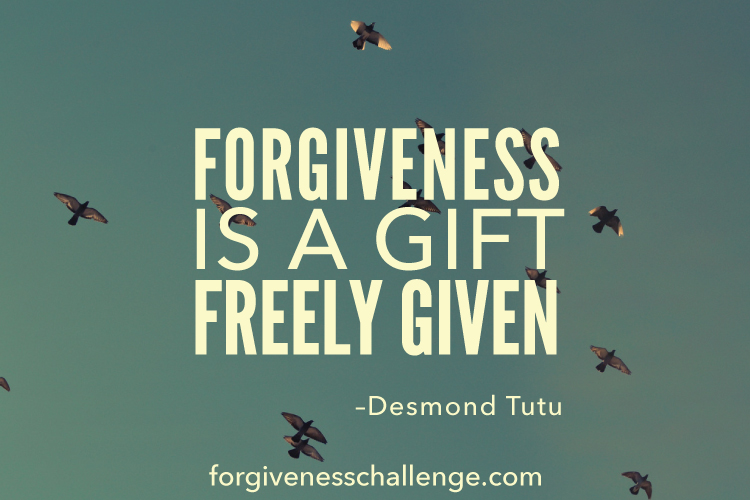 On May 4th, the Global Forgiveness Challenge begins. It was created by Desmond Tutu and his daughter Mpho, who live in a country where there are decades of grievous hurt and stored resentment. The goal of the challenge is to encourage you to let go of your emotional baggage and begin the healing process. Once you sign up for the challenge, you’ll receive a daily inspirational message by email from Tutu and his daughter, daily exercises to practice, articles to read and the support of an entire community of fellow sufferers.

I’ve signed up for the challenge. Perhaps with their help I might even be able to forgive myself.

You’ll find more information about the Forgiveness Challenge here.Let me know if you’ve joined the challenge, and perhaps we can all help each other.

I started Lion Tail Magic as a way to help people recapture the adventurous spirit of their childhood -- exploration, curiosity about everything, and a belief that anything is possible if you want it and are willing to work towards it. I am a travel coach, professional speaker, writer and endlessly curious world traveller. View all posts by ejurus